Since you were in college, you have known the type. They were the ones that dominated discussions within work groups and couldn’t stop talking about themselves in study sessions. Their opinion is the only valid one. Your ideas aren’t any good. You have grown accustomed to their behavior and accept it as part of the job. The narcissists must be everywhere, you assume. While that may be the case, law attracts them more than almost any other field.

Narcissists choose law as a platform to confirm what they already think about their own intelligence and greatness.  They will go to any length to prove it to juries, judges, their peers, and most importantly, themselves. Narcissism, also known as Narcissistic Personality Disorder (NPD), is a mental condition highlighted by an inflated sense of importance and entitlement, lack of empathy, and a fear of criticism because of a vulnerable self-esteem that is masked with the appearance of confidence.

o They believe opposition to their point of view is a personal attack.
o They are not able to take criticism.
o Display aggressive behavior.
o Surround themselves with people that agree with them.
o When they are wrong or they fail, it is never their fault.
o Extreme sense of entitlement.
o Manipulative.
o Lack empathy.

This is not to say that all attorneys are narcissists, however. While we are all capable of demonstrating behaviors that are narcissistic in nature, it is estimated that at least 10% of attorneys in the United States express some form of these narcissistic qualities on a consistent basis. This percentage may be even greater at more prestigious law firms as narcissists want to use the accomplishments of others to fulfill their visions of grandeur. Narcissists see a firm’s good name as a tool of validity, not as an employer they can contribute to in challenging cases. If a firm is composed of 20 lawyers, it likely has two or more narcissists among them. What are they doing for, or rather to, your law firm?

You assign your brightest young associate to take information from two clients that each could lead to very large settlements. This associate graduated near the top of their class at your alma mater, which you know is a great school that makes excellent lawyers. The confidence they exude in staff meetings translates well to client interactions, so they are a naturally good option to do something so simple as taking information from walk-in clients. So why did one client stop communicating with your firm shortly after their meeting? Why would it appear the other client misinformed you of the circumstances of their case over months of litigation?

How you interact with a client significantly affects the outcome of their case. As narcissists lack empathy, how do you know your client’s needs are being addressed? Showing empathy affects rapport, which is important for maintaining trust in any relationship. If your client doesn’t trust you, nor do they believe you have an understanding of their intentions and motivations, why wouldn’t they look elsewhere with their case?

The ego of the narcissist requires validation. This need seeps its way into the questioning process and spoils the answers from your client as narcissists tend to ask leading questions to confirm their own brilliance, not to acquire accurate and authentic information.

“Obviously, you filed a complaint for the original infraction, right?”

What happens is that the client ends up providing inaccurate information in order to appease the narcissistic intentions of the questioner. These inaccuracies will create the foundation of your case and will be exposed only at the most inopportune time (court).

Narcissists are not to be confused with Type A’s. Pure Type A personalities can be your best workers. They are driven and if they fail they will take responsibility for their role and their failure won’t be because they were outworked. Narcissists, however, are not exceptionally motivated workers. They are rather poor workers that seek the easiest path toward their goal of ego fulfillment. Doing the tough work behind the scenes is irrelevant as it is not something they get credit for. If they fail, they are highly unlikely to take accountability for their actions. They will manipulate people to achieve their goals and subject those same people to blame if it doesn’t work out well for them.

Narcissists are masters of the appearance of confidence. Their domination of social and professional exchanges leads some to believe they are confident in their abilities. Their confidence is a façade, however, which creates the need to mask their inabilities and to establish a compliance of thought in their circles. They will seek out those who take the bait of their false persona and manipulate them into furthering their lies. Those that challenge them and their ideas are met with aggressive action such as degradation and sabotage. This creates a polarization effect within the workplace.

How do I deal with narcissists?

Narcissists seek validation, yet what they seek validation for are destructive behaviors. They want to be rewarded with accolades for work they did not do and expect to be handed things they did not earn. Identifying this mentality early is important. Using this knowledge with operant conditioning, you can reward good behaviors with positive reinforcement in the form of recognition and address bad behaviors with negative punishment in the form of taking away titles or earned accolades. These are the things they care about. If they worked well with others, tell them they did a great job working in a team. If they acted selfishly, take away their responsibilities of being a project leader.

There are more creative ways in dealing with NPD. As I work with attorneys, I have come to accept NPD and not fight it. If I have a class of 80 students, I can expect no less than 8 of them will express narcissistic behaviors during the course of instruction. It never fails. They can’t help themselves.

This how I deal with NPD in my training classes:

It’s extremely important for me to train every student I have to the best of my ability. Narcissists, however, tend to make things difficult. They distract others and will ask questions as to devalue the information. Narcissists need to benefit from the information more than anyone as they happen to be the firm’s biggest detriment when it comes to obtaining information from others.

To deal with narcissists, I set small traps for them by using their narcissism to my advantage.

The trap is in the form of a game that I know they would like to play. I don’t advertise that it’s a game, but knowing how they operate, I make sure they are paying attention and receiving the material just like everyone else… even if they believe they know all of the information and are superior in their mastery of it than myself.

Part of what I do in my training is I vary the format on my PowerPoint slides. I’ll use different fonts and colors and place the text in different locations on the slides. (How many times have you been watching a PowerPoint presentation and not noticed when slides change?) While this helps to keep all students engaged and enthused, this variance is where I will lay my trap for the narcissists. Once every five to ten slides, I will have one with a dark background that I have my topics appear on in sequential order as I click through, discussing my helpful information. 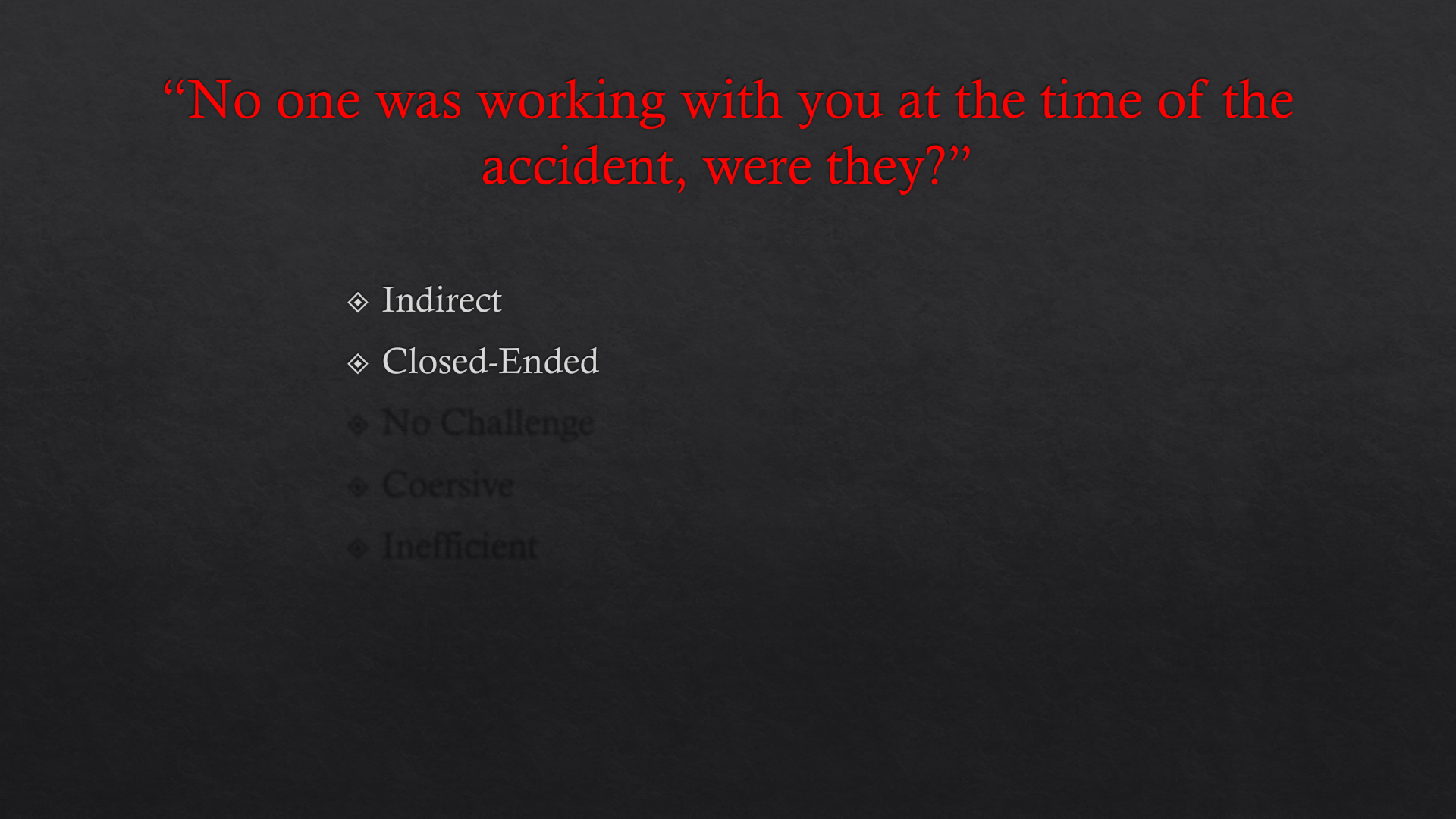 I have my discussion topics appear over a faint silhouette of the words that my narcissist students will be sure to pounce on in order to anticipate my information and display their otherworldly intellect to their greatness-confirming friends sitting on their flanks. Meanwhile, they are taking in new information at a much higher rate than if the slides did not have the silhouettes. By being baited into the game, they have no choice but to use my slides for their ego stroking. They anticipate what I am saying by reading ahead, then confirming their new information with my spoken delivery. In other words, I helped them become the expert by giving them their all-important confirmation. Congratulations narcissists, you have won.

The narcissists end up receiving all of the information (or reinforcing it, if you ask them). Their work performance proves this as they are more likely to acknowledge when they are using leading questions and not establishing rapport. They now have the choice of clearing up this behavior and becoming better attorneys and perhaps better co-workers.

There is no reason that narcissists cannot be excellent co-workers. The problem is that those in authority positions allow and sometimes encourage their behavior because they see them as confident, which to many equals competence in the absence of sufficient information. While they may make this determination because they only see these behaviors in small samples, they do not comprehend the bigger picture that narcissists are often living a lie that is ultimately a detriment to themselves and those around them. You must take an extra step to obtain this information. In private, ask associates to briefly critique their peers’ performance.

Questions like these will help you ascertain who the narcissists are without alarming them and creating a rift. If someone had an issue with a coworker, they would likely take the open format to say who they also do not work well with and why.

To confront the suspected narcissist, it is important to always take the time to question factors and logic. If you want someone to think like you, you must understand them first.

“So what made you feel this was a good decision?”

This is a harmless question that asks for both an analysis of factors but also a self-reflection of logic. Coming from a position of power, the associate will be more likely to take this line of thinking into account in future decision-making.

Taking the time to ask simple, open-ended questions can have extraordinary consequences.

It is okay to have an ego. Especially in the law field. However, it is not okay to implement your ego into everything you do. Acknowledging when your ego is a detriment to your work is the first step to reversing those behaviors and becoming truly talented at what you do. Training NPD out of people is impossible. Retraining the behaviors that reinforce ego issues will go a long way to ensure you are receiving the correct information from your clients and that you do not lose your next case because of it.

If the narcissist associate does not correct their behaviors, the next step is to confront them directly. This will likely lead to an adverse reaction ranging from a display of passive aggressive rage to an impulsive resignation, or both. However, if you are compassionate and supportive, utilizing their desires and mentoring their behaviors can have a positive effect on the narcissist, as the next step after leaving your firm is surely not going to be a step up.

To learn more about Intellecture Training questioning techniques, please observe our Law Interview Class Suite or contact us to discuss a consultation.